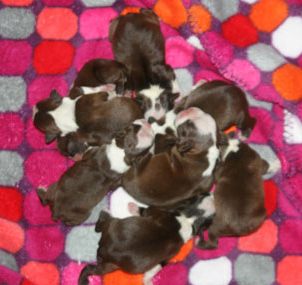 Linda trained as a veterinary technician, although she is no longer able to work in that field due to an injury. She grew up with a Boston terrier named Lollipop and has always loved the breed. Linda bred her first litter of Bostons in 1997 out of another Lollipop, but she and her four children were so much in love with Lolly that they decided to get another Boston and breed them. They bought a male named Popsicle. Lolly and Popsie had their first litter in August of 1997, and we kept Tootsie Pop (a female to breed) and Chunky Bar (a male we neutered) from that litter. And so the "edible" tradition began. In 1998, Lolly had another litter, from which we kept another female, Snickers Bar, our first brindle.

We have welcomed troubled children - and adults - into our home, so depending on when you visit here, the faces you see could change. We have also helped Linda's mom for many years take care of Linda's dad & grandmother, both of whom had a diagnosis of Alzheimer's disease. Linda's dad & grandmother have moved on to their heavenly address, and Linda's mom decided to move to a retirement community. Our family life certainly has changed over the past few years, but never our love for our babies! We now have four boys in our home, so our family life can be a little hectic, but never lacks in the love department.

We have continued to improve our Boston line, adding first Skittles from the Champion Wildax line, then his son Chilly Willee. They have both crossed the Rainbow Bridge now, but we have girls from their wonderful line. We have added reds to our line with our gorgeous Red Bull, who is now retired. We then added Red Zinger and have a number of girls from his line now. Our latest male is Champ, short for Champagne - a very light blue male. He has the sweetest temperament and reminds us all of our sweet Skittles in both build and his loving nature. He has had his first litters, and they are both gorgeous and so very sweet.

We breed only Bostons and do so in our home. They never leave our living space where they receive lots of hands-on attention from the family. We do not have a traditional kennel; we keep our dogs in the house, believing that Bostons are meant to be family pets.

How to Find Us

We are located in the Mid-Shenandoah Valley, approximately 2 hours from the DC area, 2 hours from the Richmond area, and 2 hours from the Roanoke area. The mountains are always gorgeous, so it is worth the drive just to see them, and of course...to get the licks from the babies. Linda never gets tired of puppy breath!